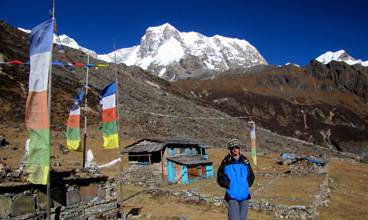 Mt. Makalu (8481 meters / 27,825 feet) is fifth highest peak of the world and Mt. Everest's proud neighbor. It’s presence graces throughout the trek. The Makalu Barun National Park established in 1992 is 1500 square kilometers of unexplored land in eastern Nepal. The Barun Valley stretches east from Solukhumbu National Park, passing through Tibet's high plateau and a deep sub-tropical gorge formed by the Arun River. As a result of a bilateral agreement between Nepal and China, this distant territory is classified as an International Protected Area. Solukhumbu and Sankhuwasabha are the two districts that make up the Makalu Barun National Park.

The Barun Valley trek begins in Tumlingtar and travels down the Barun River Valley, passing through various villages and over high altitude passes like as Shipton La Pass (4220m), Keke La Pass I (4150m) and the midnight blue Kalipokhri Lake. Makalu Base Camp is the highest point on this trek (5000m). The adventure begins in the center of Makalu-Barun Valley National Park. There are so many different sceneries on the trail that no two days are the same. High waterfalls cascade into deep valleys and lush forests are nestled between massive rocky outcroppings. Colorful alpine flowers flourish in broad fields of rock and rubble at higher elevations. Much of the trail is desolate, requiring tent camping. Sleeping outside in the shadow of the Himalayas offers an extra layer of adventure. You will have a more intimate encounter with Mother Nature. Recognize that you do not exist in isolation from nature, but rather in partnership with it.

The track gradually ascends from broadleaf forests to highland shrub and meadow environment. The great range of plants and animals in the Barun Valley will be presented to you as you embark on this journey. Enjoy one of the 3,000 flowering plants (including 25 different rhododendron kinds!). Look out for some of the 440 bird species, as well as the endangered snow leopard, red panda, musk deer, wild boar, and other animals! Because certain species can only be found here and nowhere else on the planet, it has been dubbed a "living laboratory" for scientific research by certain scientists.

Trekking is available all year, but the finest seasons are spring (March to May) and autumn (September to November). The rhododendrons are blossoming in the Spring, while the skies are often clearer in the Autumn months. However, there are fewer tourists during the monsoon season. Each season has its own set of advantages. To avoid serious mountain sickness, the Barun Valley Trek requires moderate fitness or acclimatization.

When you will arrive at Kathmandu airport, a representative from Firante will greet you and transport you to your hotel. You may either relax in your hotel or go for a stroll through Thamel to do some last-minute shopping and take in the sights.

Your guide will take you to several historical and sacred sites in Kathmandu Valley today. The UNESCO-listed Durbar Square, the sacred Hindu temple of Pashupatinath, the Monkey Temple (Swayambhunath), and the Buddhist temple of Bouddhanath will all be visited. We'll go over the itinerary and meet with our trip leader today as well.

We'll travel for three to four hours today, starting with a flight to Tumlingtar and then a car journey to the Gurung settlement of Chichira, where we'll spend the night.

We'll get started early because we have a six- to seven-hour trek ahead of us. The trail leads us past a number of charming and distinctive settlements, with views of forests and mountains, until we arrive at Num, which is perched high on a ridge. We'll spend the night here.

Today we will descend through the forest and across terraced fields until we will reach the Barun River. We will reach the Makalu Barun National Park after crossing and re-crossing the river, where we must register and receive a permit. Then we'll keep going till we get to Seduwa, where we'll spend the night.

Today, our four-to-five-hour trek will begin by descending down to the Kasuwa Khola (river) and then climb into the hills, passing past rice fields, till we reach Tashi Gaon, a beautiful village with spectacular Himalayan views. We'll spend the night here.

Today's trek will begin with a climb to Chipla Village, which sits atop the ridge. We will then continue through the forest till we reach Kharka Village (2900m) and finally Unshisha Village. Then we will climb stone stairs to Dhara Kharka, a little grazing pasture at the ridge's summit. We will then make our way down to Kahuma Danda Village, where we will spend the night.

We will have a leisure day today, so we can catch up on laundry and explore the neighborhood, taking in the natural beauty of the area. We'll spend the night here in Kahuma Danda.

The twin peaks of Chamlang, Peak 6 and Peak 7, can be seen from the route today. We will ascend a stone path from the top of the slope to a tiny lake until we reach Kike La Pass. After that, we will descend from the pass through a rhododendron forest to Mumbuk Village, where we will spend the night.

Today's trail and trek will take you down a steep slope through a small valley before crossing the Barun Khola near Tamatan Kharka. We will continue along the riverbank until we reach the village of Yangri Kharka.

Today's trail will take us across a wooden bridge over the Barun River, then across a rocky riverbed and past a prayer wall to Sherson, where we can glimpse the lower Barun glacier and Mt. Makalu's soaring splendor. Mt. Makalu's lower base camp is located here. The views of Makalu's south face and Mt. Baruntse are spectacular from here. We'll pitch our tent for the night at Sherson.

Today, we'll travel to the world's highest base camp. Before reaching the base camp on the river's west bank, we will pass through a boulder-strewn terrain. We will get spectacular views of Makalu's south face, Mt Everest, Baruntse, Peaks 6 and 7, and Lhotse from here. This is without a doubt the journey's high point.

Today, we will take in the surroundings around Makalu Base Camp and savor the experience of having traveled to such a high height. The rough arid rocky environment is topped by the Barun Glacier. From here, we will have a panoramic view of Mt. Everest and Mt. Lhotse, as well as the south face of Makalu.

Today we'll return back to Nehe Kharka on the same trail we’ve taken before and spend the night there.

We will travel to Mumbuk via Rhododendron and Pine Forest today. We will arrive in time to witness the sunset over the mountains. We'll spend the night here in Mumbuk.

We will leave Mumbuk today and trek across the Shipton La Pass to Kauma Village, where we will spend the night.

We will descend to Tashi Gaon today, arriving in plenty of time to relax and unwind after our ascent to higher altitudes.

Today's trail passes through cultivated fields before arriving at the Ipsuwa Khola (river). We will stop for lunch after crossing a suspension bridge and head towards Balung, where we will spend the night.

Today's journey will take us to the Rai town of Walung (880m), then across the Apsawa Khola (river), and up to Chhayang Village, another Rai settlement. We'll continue on to Parangbu Village and then to Pukuwa (550m), where we'll spend the night.

Today we will travel to Tome, then down into the Arun Valley along the banks of the Sankhuwa Khola (river) to the Chhetri village of Bumling, where we will spend the night.

Today will be our final day of trekking, we will follow the river downstream to its confluence with the Arun River, trek along its east bank via Chyawabesi Village, then climb back up the Tumlingtar plateau to the hotel where we will spend the night.

Today we will fly back to Kathmandu on a picturesque flight and we can look back over the mountains that have been our home for the past two weeks. We have the option of relaxing at our hotel or wandering around Thamel for some last-minute shopping once we get in Kathmandu. We will host a farewell meal tonight to commemorate the end of this arduous journey to Makalu Base Camp.

It's the last day of your trip to Nepal! Grab a bite to eat before heading for last-minute shopping. We'll make sure you get to Kathmandu International Airport in plenty of time for your return trip. We'll say our goodbyes and bid you farewell at this time, leaving you with pleasant memories and beautiful images to show your loved ones.

Firante Treks and Expedition Manages for best and comfortable accommodation and also provides you hygienic food. Standard (3 Star) are booked in the cities such as Kathmandu and Pokhara, whereas a tyical trek lodge will be booked on remote areas.

Luxurious rooms from 5 Star hotels are also made avaiable on demand in the cities on additional cost but remote regionss dont have such facilities.